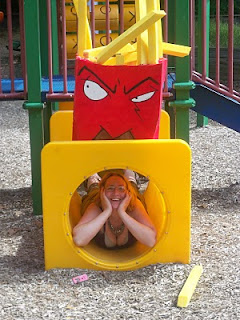 So everything is going good finally. I thank God for the blessings I have, and hope they keep comming. On that note, I have a bad ear infection which requires these massive ammoxicillin horse pills, and I can't hear out my left ear at all. Once that goes away I have an appointment with a surgeon on tuesday for some breast lumps. When I went into my doctor for my ear infection I finally got the nerve up to ask what was going on and why I had to see a surgeon.
He says that the clusters they found on the mammogram are almost never cancer in someone my age, but that they have to check to make sure. I was all prepared to have it lopped off like a large mole. My body is probably just mad about all the abuse I put it through, so it decided to remind me that I don't have complete control over it. I mean, I really didn't use these BooBa's to their full capacity, and maybe they just want to remind me who the boss really is. Boobs. Cause everyone loves some boobs.
Whether it be the old man on the park bench.. the girl admiring herself in the mirror, or the baby mouth agape waiting for that sweet sweet milk, everyone loves some BooBas.
So I guess it is time to start appreciating what my body does for me, instead of just using it until it falls apart. Time to show off some knockers! (cause the paranoid scared part of me still thinks I might loose one of the super twins.)
Posted by Nellie Tobey at 6:57 PM No comments:

I looked up cheats for Sims 3. I just like to build the houses. That is the best part of the game. If I could just dress them up change thier houses and kill them once and a while, I'd be fine with that being the entire game. Maybe they make a game where you can just build the Sims houses...

I signed an employment agreement today. Thank goodness. My sons biological father has agreed to give up all custody and visitations. All I had to do was drop the parental rights case, and future child support. Right, like I would have seen any money from him anyways.

It's funny how that works. Two lawyers get together and figure out how to get it done with the least amount of work and BooM... the system works. I feel bad for the mom's out there who don't have money to get a good family court lawyer. If I ever win the Lotto or some fabulous money tree grows in my yard I think that would be the first thing I'd do -- Set up a charitable account that would help poverty level mothers/fathers get lawyers to help thier kids out. Kinda like CASA but for kids that have parents without the finacial ability to use the court systems. I've known plenty of them that should never have been with the parents they had and were just stuck with it because no one could step up to stop the tragedy around them.

God takes care of us sparrows. I have food, I now have a real job, and my son isn't at risk of being thrown against his will into a relationship that would do nothing but damage him. I have a home, comfort, and now way less worries. It may just be the berries growing in land about me, but it is plenty to keep me from needing. It may just be a nest of twigs, but it keeps me from falling out of the tree when I sleep.

Anyhoo, I have to start thinking of a good short story, that or I'll start working on Escape from Bastille some more.
Posted by Nellie Tobey at 7:10 PM No comments:

The system has moments it seems where in it does actually work. After an hour of waiting, his *free court appointed lawyer* and my 850$ lawyer *I'm sure I'll get a nice fat bill also* talking for ten minutes, it seems all I had to do was give up future child support, and drop the petition to terminate his parental rights.

I now have sole physical and legal custody, as well as his parental time being reduced to zero.

I now have plenty to be thankful for. I am no longer stuck in this town. I no longer have to wait for permission from my Ex and the courts to move more then 50 miles away.

I don't have to worry about whether or not my ex is going to become suddenly interested in jumping in my son's life out of the blue. So now the choice is... South or North? Can't go much further West.... The south East part of the state seems to get some wicked ends of the storms.

Kalamazoo high school has that promise thing, where kids that graduate get gaurenteed college tuition... Hmmmm time to hit up craigs list me thinks.
Posted by Nellie Tobey at 6:03 PM No comments: 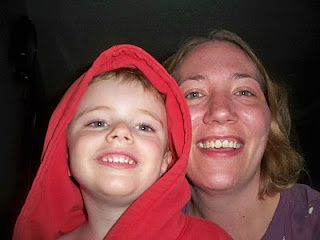 Nice little storm rolled through today. I miss the huge long storms we used to get in Newaygo when i was a kid. Maybe they just seemed like really long storms, but I just wish we would get one that shook the house for hours.

I know, it's silly and there are probably a lot of storm haters that now wish me great bodily harm, but something about mother nature unleashing something man has yet to tame makes me all primal and happy inside.

The heat though.... Old mother nature can stop anytime now. My body starts shutting itself down when the humidity gets that high. Eh, I guess I need the heat to get storms though. Something about the pressures from high and low mashing together in a battle royal starts the good stuff in the sky.

Anyhoo, my pretrial is tomorrow for my son's rights. I won't say they are for my ex, because it isn't about him, it is about my son getting to lead the best, most loved, safe and productive life he can. So when you're looking through the prayer e-mails tonight Lord, could you not mark mine as Spam? This sparrow needs some wind to carry the little one away from dark lands.
Posted by Nellie Tobey at 4:01 PM No comments: 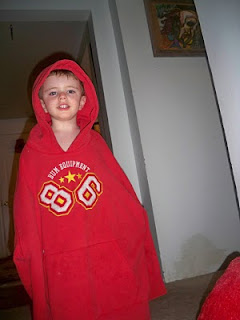 I remember thinking that I could make a parachute out of a sheet, or make working wings out of garbage bags and sticks. The sense that those things are easy and possible has been ripped out of me by adulthood, but now my son is starting to rekindle the spirit of possibilities. He puts on my favorite red hoodie like it is special and magical. Even though he hasn't figured out how to say "I love you mommy" stuff like that totally makes up for it.

Even makes up for the sword whipping frenzies he gets into with the long piece of foam batting (he happens to be attacking everything in site at the moment).

At least my poor old dog has figured out how to hide when Richard goes into super hero mode.
Posted by Nellie Tobey at 7:22 PM No comments:

Lets just make it understood that my matierial is sensored. Maybe I'm a tad paranoid, but it seems a bad idea to write too much personal information or strong setiments when I still haven't gotten hired (back in by the way) after 3 years of being a temp and I still have to go to court to get my ex's parental rights stripped.

Sooner those two things take care of themselves the better. For my son's sake and mine.... I'm real tierd of giving my job the benefit of the doubt. Then again the statute of limitations won't apply for a FMLA violation until they officially deny me my job back. Oh ya, did I mention that I was pregnant and disabled from bipolar when I quit for medical reasons? Did I mention that I was welcomed back and given a part time temp position by the time my son was 3 months old? ....Seems like it is a no brainer to me, but then again corporate types have a habit of seeing laws through shaded lenses.

I'd like to think they are just being slow, give them the benefit of the doubt. It gets real hard some mornings to get up and make it to that hot stinking shop knowing I might never get my job back though. The sad part?
I love my job and I still want it. I know, who wants that kind of job?
Just people like me I guess.
Posted by Nellie Tobey at 2:23 AM No comments:

Ok, yes I understand that grammer is very important when trying to elicit the proper responses to a spoken or written language, but let us face it: The english language is rediculously complicated.

But for some reason if I type an improper phonetical series of misplaced pronouns and adverbs, those with a much more advance language center in thier brain think it proper to poop on my party and tell me I'm dumb.

Well you stupid online article writing job application, this is for you.

Twilight grossed how much over the last three movies???? Have you read those books!

And another thing, I suck at grammer. I do need to get better at it. But dang it, I am not going to put grammer check on my computer... I'm not even sure how to fix the past present participle crap.
Posted by Nellie Tobey at 7:22 PM No comments: